News and EventsIoTThe Eye of the Storm: Gaining Real-Time Visibility with Iridium

The Eye of the Storm: Gaining Real-Time Visibility with Iridium 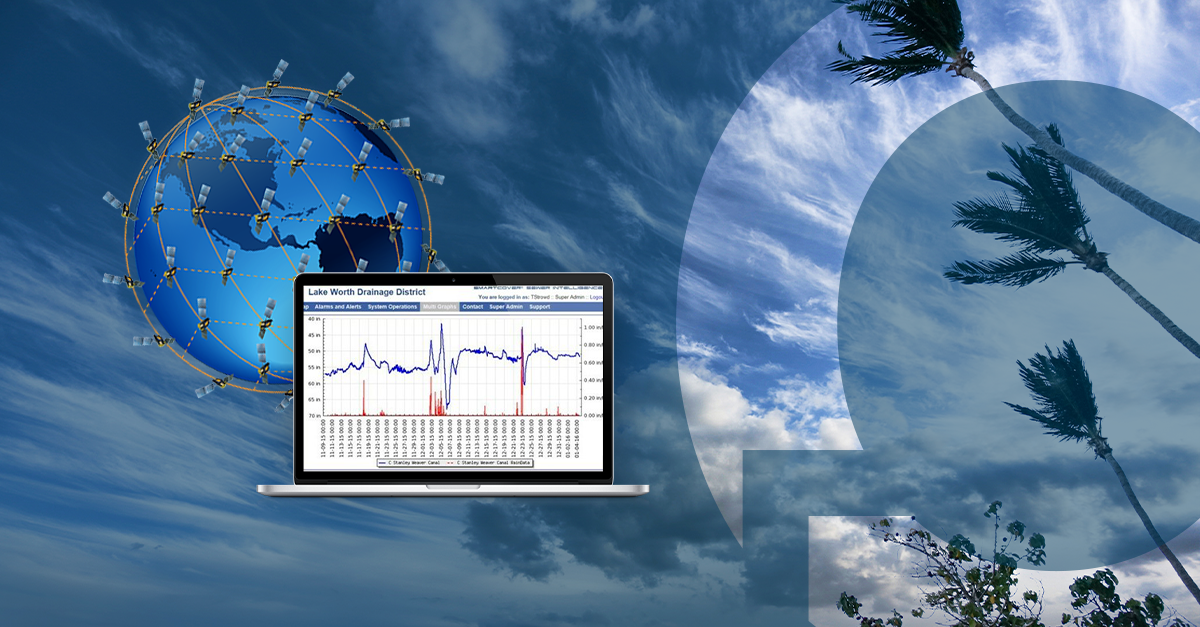 Florida’s Lake Worth Drainage District (the District) is a case study in maximizing the potential of SmartCover’s remote monitoring technology by leveraging satellite communication.

The District provides comprehensive flood control, water conservation and water supply protection for 13 municipalities, serving more than 750,000 residents. The District monitors and controls a complex system of approximately 500 miles of canals, 20 major water control structures and numerous minor structures across over 200 square miles – a daunting task given the potential for large storm events and the physical extent of the District.

“MetOcean and SmartCover joined forces to provide real-time satellite monitoring that enabled the District to gain uninterrupted visibility of their infrastructure and protect the surrounding environment.”

The increasing severity of hurricanes and heavy rains have contributed to greater sewer overflows; damaging property, harming the environment, and impacting public health. The District looked to enhance their sewer intelligence with real-time visibility into the status of their underground infrastructure, to protect the public health of the residents in the face of extreme weather events.

MetOcean and SmartCover joined forces to provide real-time satellite monitoring that enabled them to gain uninterrupted visibility of their infrastructure and protect the surrounding environment. By leveraging the Iridium satellite network, SmartCover’s remote monitoring technology helped the District prevent sewer spills during one of the most severe weather events to hit southeast Florida.

SmartCover’s industry leading analytics include a comprehensive dashboard with alarms and notifications that monitor systems continuously 24 hours per day, 7 days per week. It is also the only North American sewer monitoring company utilizing the Iridium satellite network.

SmartCover has cumulatively acquired more than 15,000 years of data to provide robust and reliable data acquisition and alarming functions. The built-in event management platform integrates localized weather and tidal data from the National Oceanic and Atmospheric Administration (NOAA) as well as USGS stream data to help respond to issues before they become environmental, financial and public health emergencies.

In order to protect its residents, the District deployed SmartCover monitoring technology to gain a combined system-wide view of their canal status, as well as rainfall intensity and duration. SmartCover’s industry leading analytics, alarms, and notifications utilize the Iridium satellite network, guaranteeing reliable connectivity even during power and cell outages.

“The unparalleled reach, high coverage and high dependability of the Iridium network meant that users could rely on critical communication lines to work when they need it most – such as during a Category Five hurricane.”

Powered by a sophisticated global constellation of 66 cross-linked Low Earth-Orbit (LEO) satellites, the Iridium satellite network provides a web of coverage that encompasses the entire planet. The Iridium LEO network uses L-band frequencies to communicate with its users as these frequencies are more resilient to weather, providing reliable communications even in adverse conditions. In space, an Iridium satellite is linked up to four others – creating a dynamic network that routes traffic among satellites to ensure data is transmitted at the fastest possible speeds, no matter what happens on Earth or in orbit.

In 2019, Iridium completed the $3 billion Iridium NEXT mission, which completely replaced the first-generation Iridium constellation and set the foundation for Iridium to meet the growing demand for global communications around the world. The unparalleled reach, high coverage and high dependability of the Iridium network meant that users could rely on critical communication lines to work when they need it most – such as during a Category Five hurricane.

The SmartCover technology utilizing satellite communications was put to the test during Hurricane Irma in September of 2017. Hurricane Irma was the strongest storm on record to exist in the open Atlantic region, and the combined effect of storm surge and tide produced maximum inundation levels of 4 to 6 ft above ground level for portions of Miami-Dade County in southeastern Florida.[1] The SmartCover units utilized the Iridium satellite network to constantly communicate the dynamic conditions within the District’s flood control infrastructure. This, along with the integration of NOAA rainfall information, regional radar data and tidal information, worked in conjunction with the District’s remote-control SCADA system to limit the risks to home damage as well as other environmental risks due to potential sewer overflows.

The use of the Iridium satellite network revolutionized the District’s response time, allowing changes in conditions to be monitored in real-time, with full visibility from the satellite network, reducing the uncertainty around the conditions in the flood control network. This adaptive stormwater system allowed the District to operate with no interruption in service before, during, or after Irma – a feat that could not have been accomplished with standard mobile technology. This constant visibility resulted in no sewer spills, protecting the public health of the District’s residents and enhancing the resiliency of the utility.