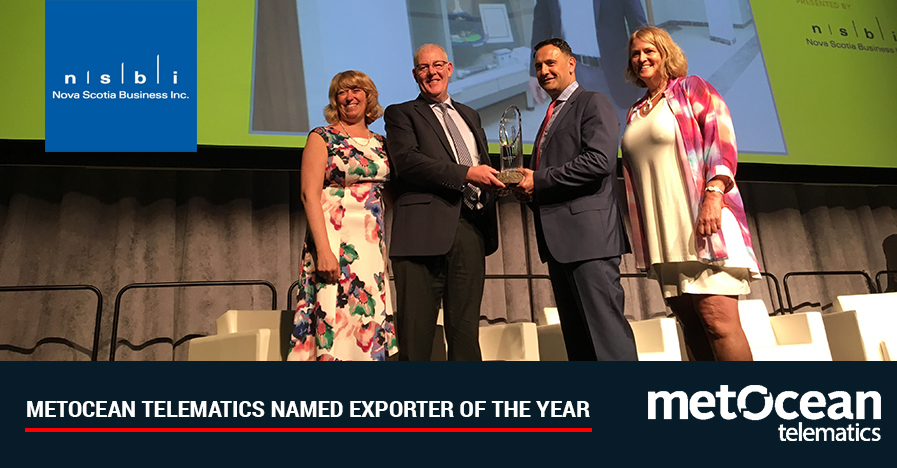 MetOcean Telematics is pleased to announce it has been named Exporter of the Year, over $5 million in Export Sales and International Market Champion of the Year at the Nova Scotia Export Achievement Awards.

The Nova Scotia Export Achievement Awards recognizes outstanding contributions that businesses have made to Nova Scotia’s economy through the export of products and services. In 2019, companies from across the province were recognized via five (5) award categories for their role in Nova Scotia’s export success. MetOcean Telematics was nominated and then awarded for International Market Champion of the Year: Presented to an exporter who has excelled in international exports (outside of Canada) and made significant contributions to the development of the Nova Scotia economy within the past (2) years. In addition, we were also awarded the Exporter of the Year over $5 million in export sales!

It is a true honor to have been recognized by the Nova Scotia Business Institute and the annual Nova Scotia Export Achievement Awards. We would like to thank and congratulate all of the other 2019 nominees at this years award ceremony and especially NSBI for there tireless effort in helping businesses like ours work towards a strong, thriving and globally competitive Nova Scotia through attracting global investment to create new jobs across the province and working with companies in all communities to be more successful exporters.

MetOcean is Exhibiting at Oi Americas in San Diego, CA from February 14-16, 2023