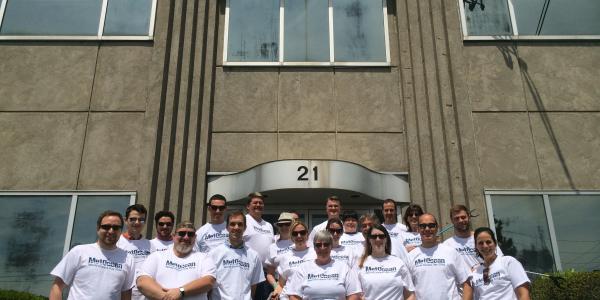 MetOceanData Systems (“MetOcean”), designer and producer of state-of-the-art data acquisition and remote telemetry systems, has taken its oceanographic expertise to a new level – street level. MetOcean staff members took part in this year’s World Oceans Day by cleaning up litter around the business park where MetOcean is headquartered, in Dartmouth, Nova Scotia.

There are World Oceans Day events allover the world, and every year it is getting bigger and more awareness is built around it. MetOcean wanted to do its part to participate in this year’s celebration.

According to the World Oceans Day press release, “People in communities around the globe will celebrate this year’s World Oceans Day with the theme of ‘Together we have the power to protect the ocean.’ Hundreds of events are planned to help people get involved in solutions for a healthy ocean and society – by supporting clean energy choices, trash-free coasts and beaches, sustainable seafood, and more.” (http://worldoceansday.org/)

“We wanted to get involved in this year’s World Oceans Day, as our waters play such a vital role to all of us,especially in our industry,” said Collette Francheville, Marketing at MetOcean. Francheville continued, “We put the idea out there to staff and the interest was overwhelming. Often we find that litter on the ground eventually ends up in oceans, so it is crucial we do our part to keep our waterways clean.” She added, “It also didn’t hurt that it was such a beautiful day outside.”

With offices closed on June 8th, over half of MetOcean staff took to the streets of Burnside Industrial Park on June 9th to clean up litter for World Oceans Day. With the sun shining, litter pickers in hand, the busy team picked 15 full bags in an hour.There was plenty of support from passing cars, as well as a donation of a case of water, for the happy pickers. Amongst the countless plastic bags and coffee cups, some of the stranger items within 15 bags included:  a flipper, a jacket, a pair of pants, a ceramic tile, as well as a vacuum cleaner. It’s hard to imagine how and why some of these items ended up where they did, but removing it before it ended up in the ocean is the part that matters.

By event’s end, the MetOcean team took part in a global initiative, got exercise, sun, many laughs, as well as made a profitable return of 85 cents in bottles!

MetOcean Telematics is Exhibiting at Pacific Marine Expo in Seattle, WA from November 17-19, 2022